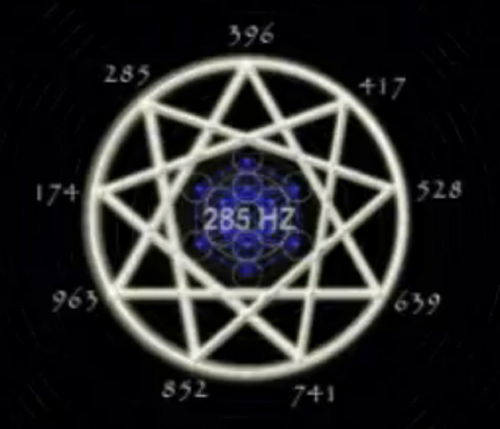 The original Solfeggio harmonics used in Gregorian Chant is a specific scale that differs from the Western Chromatic Scale.

The Solfeggio scale is derived from intrisic or Pythagorean tones that resonate with our geography and cosmos.  Intrinsic tone may be derived using the mathematics of PHI or geomantically – such as the middle C given by the great stones on Summer Solstice.

The masterpiece “Curse or Cure: it's in the Numbers” by musicologist Joe DeBrouse (now suppressed on the internet) gave the derivation of the Pythagorian tones using the mathematics of PHI.  Http://www.bodyvibes.com/cursecure.htm.

Middle C in the human vocal range should resonate with the earth's spin on its axis.

The Italian monk Guido d'Arezzo (990-1050 A.D.) created the system of Solmization using syllables to represent the tones of the scale – the Guido System.

The standard six Solfeggio Frequencies are embedded in Ut Queant Laxis, the Vespers Hymn to St John the Baptist from the Divine Office composed by Paolo Diacona ( circa 720 A.D.)

Taken together the Latin: “Ut queant laxis, Resonare fibris, Mira gestorum, Famuli tuorum, Solve poluti, Labii ratum” translate “So that Your servants may sing at the top of their voices the wonders of Your acts and absolve the fault from their stained lips.”

In therapeutics, these tones relate to:

Re    the solar plexus and cellular memory of impasse and inability or the core self  to go forward  into life (have not got the guts, or tied up into knots)

Mi    heart / thymus and the ability to believe strongly for the renewal, transformation of the self and life situations. The thymus is the master switch of the immune system and this is the     tone that is linked to genetic expression which can be switched on or off by word and tone.

Sol    pineal and awakening of the spiritual faculties of the person

La    the bio-electic field of the ensouled matter, the spirit of the person and his or her 'field', its order and the order of the cosmos.

Listen to solfeggio polyphonics with mirror tones in Gaelic music