Advance! The Chudley Where? Or (if you must) Nature Rescues the Natural Order

To a nation which will serve cream tea with chudlies and consume its vegetables in carefully separated portions (wherein not even the diced carrots may blend with with peas on the proper plate) it was a foregone conclusion that Professor Jacques Benveniste would not have the last word in the pages of Nature. ( 1 )

No mere picayune objection this. Unthinkable that the nation (Across the Channel) which consumes its vegetalbes en melange (and despises the chudley) would be permitted to rewrite the laws of physical order – making the material causation of measurable effects passe – as it were.

So in the dispute which followed publication of the Benveniste results, potent forces were mustering behind the academic debate about the physics of matter succussed in ultra high dilution ( UHD ). Sex, politics and religion were all at issue. And to the editors of Nature, unless the Benveniste results could be taken smartly in hand, uncaused effects and unnatural occurrences would be unleashed upon the properly order world of the chudley. Primal fear gripped the soul. A campaign was mounted against the experiment intolerable.

In a landmark work honouring the second centenary of Homeopathy, 'the Benveniste affaire' is cited as a 'typical example of scientific misrepresentation'. ( 2 ) It would be fascinating to know what the authors think is typical about Nature's investigation of Benveniste's research at his University of Paris-Sud facility. Perhaps they have in mind the opposition of the Holy Office to Galileo's evidences of planetary motion? The investigating monks refused to even look through Galileo's telescope. To the Copernicans, they asserted: 'if Divine Providence had intended man to view the heavens through such an object, then man would have been endowed with telescopic eyes'. ( 3 ) Who can argue with that.

By comparison with the 'investigation' foisted on Benveniste, the reluctant monks are examples of probity and decorum. They were convinced on other than empirical grounds that a geocentric cosmology was the appropriate setting for their Credo. They stated their Credo as a credo. They did not enter into scientific debate with the Copernicans and the Galileans; the Church demanded silence from Galileo, as a heretic, on religious grounds.

Not so Lasters, Bardiaux, Maddox and Randi. To be sure, they have silenced Benveniste as a heretic whose views challenge the dogma of a physical order founded on materialist principles. Indeed such an order is required for the universal pharma cartel to hold power. But unlike the decorous monks of the Holy Office, the Nature Kabal chose to deal with Benveniste not as a heretic, but as a scientist on the appearance of scientific grounds using good old fashioned bunkum and the media circus.

The editors of Nature set up an 'investigating panel composed of a journalist, a statistician and a magician. In vain would the candid mind look for a member qualified in the relevant sciences. This panel from Nature's office of inquisition were invited to witness and evaluate a repetition of Benveniste's experiment which did not reproduce the originals in terms of method. ( 4 )

As one might expect , even without looking through the microscope, Benveniste's results were ruled invalid.

Nature's Office of Inquisition explained (deigned to explain) that their Naturalnesses had found thusly because of the “incredible” nature of Benveniste's results and the difficulties of reproducibility.

Well. Difficult for a statistician and a journalist perhaps. Four universities with trained scientific team members and the requisite laboratory facilities were able to to reproduce the Benveniste experiment up to 70 times. However, according to Nature, its conclusion was based upon the incredibility of the hypothesis to be tested. That would be the assertion of Homeopathy that ultradilute substances in succussion are bioactive. Also, Nature's Office of Inquisition stated that their own panel's lack of scientific expertise and equipment, consituted Benveniste's “methodological shortcomings” . ( 5 ) Nature actually published this.

To cut to the chudley, the import or what is here being advanced is this: if measurable effects can be produced out of nothing, according to the view of Nature's Office of Inquisition, merely pulled out of the hat, then to what purpose controls and scientific method of reproducibility?

Whereas Benveniste with method of reproducibility and repeat / double blind trials could not refute the scientific hypothesis that UHD antiserum in succussion is bioactive. And his experiments reproduced at three independent facilities validate his hypothesis. Above all, validation of Benveniste's results can be questioned if his experiments are actually reproduced and different results are obtained. The same can not be said of Nature's Inquisition into his work. One must accept Nature's conclusion on the say so a a magician and his cronies.

I can hear Richard Saunders of the Australian Sceptics catechizing us now: if Evolution Almighty had intended bioenergetic effects in the chemistry of carbon, then ultradilution and succussion would be a property of organism itself. Obviously. No one need even design an experiment or look through a microscope to disprove this dogma. Heretics who want to argue must keep silence before the Inquisition of Nature.

Just as the motionless earth at the centre of a religious cosmology was enforced against Galileo and the Copernicans on theological grounds, the dogma of materialism – in this case crass materialism – as the basis of natural order is today enforced against Benveniste's work in immunology on magical grounds. He was silenced by the closing of scientific ranks to debate. The Establishment now collectively chooses to perceive that in 'the Benveniste affair' the foundations of valid empirical knowledge have been made arbitrarily invalid in his particular case. By the gods perhaps?

Even so, Benveniste continued to publish in the immunology of UHD, but it is as though his work never saw the light of print. No criticism. No comment. No discussion. Nothing. He WAS silenced. For it is preferable to believe that repeat, double blind controls and , reproducibility are invalid methods (but only in Benveniste's particular case) than to question the dogma of materialist causation in biochemistry.

Where now the world of the chudley and the natural order? 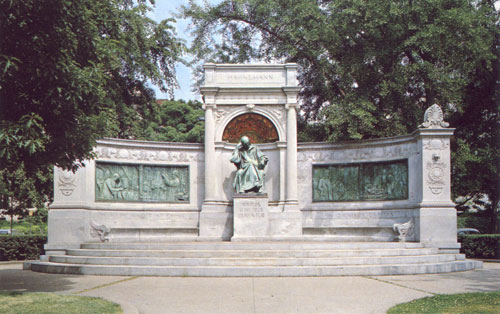 The Hahnemann Monument in Washington DC